Breast milk generally has very little odour. Sometimes it may smell or taste like something the mother has eaten recently, or been stored next to in the fridge, such as onion or garlic. Sometimes it is said to smell or taste sweet or soapy, metallic or even a little sour. Bear in mind we normally do not sample the smell or taste of breast milk before babies drink from the breast so in most cases, whatever the unique taste or smell of your freshly expressed breast milk it is likely to be delicious to your baby and quite normal. When stored appropriately, breast milk is very robust and does not easily “go off” or spoil due to bacterial contamination because it is full of protective factors. For much more information about breast milk storage see How Long Does Breast Milk Last?

Occasionally a medication or supplement that the breastfeeding mother is taking might taint breast milk with a new flavour or smell. It is also possible that a strong deodorant, perfume or nipple cream might cause an unpleasant taste. 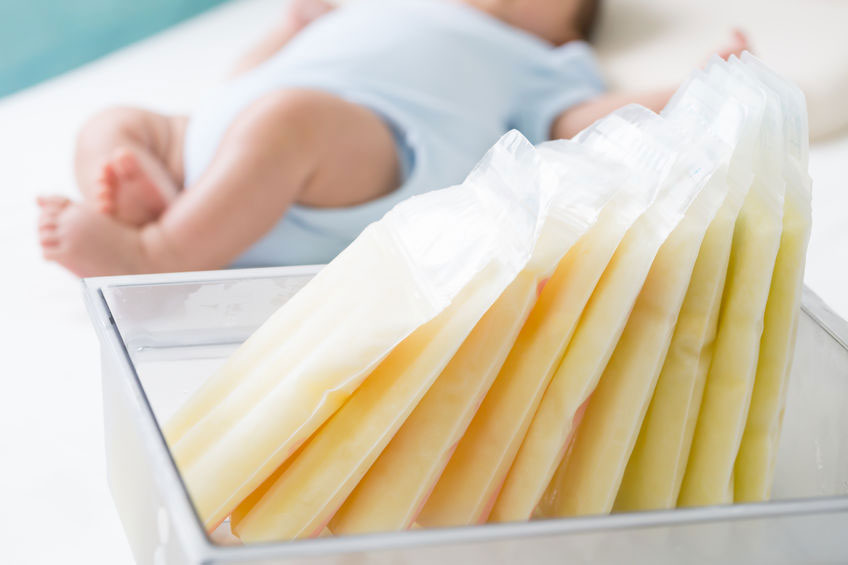 Why does breast milk smell soapy?

Having a slightly soapy taste or smell is likely to be quite normal. A soapy or sour smell is thought to be connected to the activity of a fat digesting enzyme called lipase. There are two types of lipase in breast milk; lipoprotein lipase and bile salt-stimulated lipase1. Lipase in breast milk breaks down fats into fatty acids (a process called lipolysis) and it is these fatty acids that are thought to cause the soapy taste2. In the baby’s tummy, lipase helps to digest fats and in stored milk the lipolysis process is said to help to protect breast milk from microorganisms as there is an antimicrobial effect3.

Some mothers have found that the soapy or sour smell appears to be more apparent once breast milk has been stored in the refrigerator or freezer. Some describe a “rancid” smell. Theories for stored breast milk tasting or smelling sour or rancid include:

In the past some breastfeeding authors have suggested that breast milk turns sour in mothers who have particularly high lipase levels in their breast milk. However a study by Dr Ruth Lawrence and others did not find higher lipase levels in samples of sour milk11.

Is soapy or sour milk safe to drink?

In most cases a baby will be happy to drink breast milk that has been safely stored including frozen and thawed. Generally as long as a baby doesn’t mind the taste, The Womanly Art of Breastfeeding says that soapy smelling or tasting milk isn’t a problem and it will be safe for them to drink 12.

What if my baby refuses my breast milk?

Sometimes a baby appears to dislike stored breast milk that tastes or smells sour or rancid and will refuse it. The time interval before stored milk begins to have a stronger taste varies between mothers but it is not possible to reverse the taste once this has happened—which can lead to wasted breast milk. Some mothers have found that diluting the affected milk in equal parts with freshly expressed breast milk can make it acceptable to the baby. In addition, experts offer a number of options to try to avoid the unacceptable taste whether the cause is enzyme activity (lipase) or oxidation (see below).

How can I prevent lipase activity in stored breast milk?

How can I deactivate lipase by heating?

If diet and water supply are not affecting the taste of breast milk but a baby refuses to drink previously stored milk, lipase activity can be deactivated by heating breast milk prior to storage. The best temperature to inactivate lipase but preserve the other living components of breast milk is not clear.

Scalding breast milk will not remove the soapy or rancid smell if the milk has already become tainted.19

Will heating breast milk damage it?

The Academy of Breastfeeding Medicine recommends against heating breast milk above 40ºC as this can destroy many protective factors in the milk 20 however donated milk is frequently heat treated in milk banks (Holder pasteurisation: 62.5ºC for 30 minutes) but is still considered valuable for premature babies for normal growth and development of the immune system21. Kelly Bonyata explains that although some protection will be lost or some nutrient levels lowered this is unlikely to cause issues unless a baby is exclusively receiving heat treated milk in their diet (Bonyata, 2018).

Research is ongoing into how storage techniques might affect breast milk2223.

Chemical oxidation, an explanation for sour or rancid breast milk?

One explanation for sour or rancid smelling stored milk is that a chemical reaction has occurred in the milk such as lipid oxidation or proteolysis (breakdown of proteins) (Hung et al, 2018). Oxidation is a chemical reaction involving exchange of electrons between substances. Some authors have suggested this may be associated with something present in a mother’s drinking water such as free copper or iron ions (positively or negatively charged atoms or molecules) or certain polyunsaturated fats in her diet (Mohrbacher, 2016).

How can I prevent chemical oxidation in stored breast milk?

Nancy Mohrbacher, breastfeeding author and IBCLC, mentions some specific changes to the mother’s diet may help preserve breast milk in this situation:

Why is My Breast Milk Soapy? Women’s Health Today, 2016

Vangnai et al25 looked at oxidation of breast milk during freezing and made the following recommendations to avoid rancidity of breast milk:

Some babies may refuse stored breast milk because it is offered in a bottle and it is the bottle that they do not like as they have a preference for the breast.

For information on breast milk storage see How Long Does Breast Milk Last?

Breast milk generally doesn’t have much of a smell. Breast milk is sometimes described as tasting soapy or a little sour. It can smell or taste of something the mother has eaten recently as some foods can flavour breast milk. Sometimes stored breast milk is described as tasting very sour or rancid after storage in the fridge but particularly after freezing and thawing. Although generally still thought safe to drink, some babies will refuse previously stored milk that now has a strong sour taste or smell. There are several theories for the change in taste. Research has highlighted the action of a fat digesting enzyme in breast milk as a likely cause. The enzyme can be deactivated prior to storage by scalding the milk. Another theory suggests that chemical oxidation during storage may affect taste. More research is needed.