Exclusive breastfeeding can work as a contraceptive preventing pregnancy for many women in the early months after birth. But when breastfeeding continues beyond months and into years—and a mother wants to expand her family—she may wonder whether she can get pregnant while still breastfeeding. This article looks at:

How reliable is breastfeeding as a contraceptive?

Breastfeeding can be a 98% reliable form of contraception in the first six months after birth—if a mother’s periods haven’t returned yet and her baby has nothing other than breast milk to eat or drink. The specific guidelines are described in the lactational amenorrhea method (LAM) of contraception (see below) 12. When the guidelines are followed, LAM is said to be more effective than the progestin only pill. However, once one or more of the statements are no longer true, breastfeeding stops being a reliable contraceptive. Depending on how frequently and how often a baby or toddler nurses, breastfeeding may still have a contraceptive effect beyond six months for some mothers.

Guidelines for the LAM method of contraception

LAM is a method of contraception that breastfeeding mothers can use when the following three statements hold true:

If any of the three statements don’t hold true then the mother can’t rely on LAM alone for her contraceptive needs.

Alternative contraception for the breastfeeding mother

For further information about your options for contraceptives see:

A note on hormonal methods of birth control

Hormonal methods such as the pill, contraceptive implants, hormone impregnated intrauterine devices (IUD or coil) have the potential to affect milk supply especially during the first six months after birth 56. They may also have potential to expose a baby to synthetic hormones (ABM, 2015). Jack Newman, Canadian paediatrician explains why normal methods of birth control can affect milk supply:

When breastfeeding mothers become pregnant, their milk production decreases dramatically, because the hormones of pregnancy (including the estrogens and progesterones that are in most birth control pills) inhibit the action of prolactin, the hormone that stimulates the breasts to make milk. The effect of the birth control pill on milk supply may occur with progesterone-only pills as well. The IUD, which releases progesterone, also seems to decrease milk production in some mothers.

See the ABM Protocol for a look at the contradictory research on the impact of hormonal contraceptives on milk supply and for the pros and cons of all options.

Can you get pregnant while breastfeeding?

It is unlikely that a mother who is exclusively breastfeeding her baby in the first six months according to LAM guidelines will conceive. After about six months, once solids are introduced in her baby’s diet the contraceptive effect can no longer be guaranteed and a mother could get pregnant while she is still breastfeeding. For some mothers, the contraceptive effect of breastfeeding may carry on for longer, especially if breastfeeding happens at least every four hours in the day and six hours at night and is offered before complementary foods are given (ABM, 2015). Exactly how soon a mother’s fertility returns is unique to each individual mother:

The Womanly Art of Breastfeeding, LLLI, 2010

frequent nursing is a powerful fertility suppressor, as part of a well designed system: when a baby grows older and starts nursing less often, that’s a signal that he’s finally able to share his mother with a younger sibling. 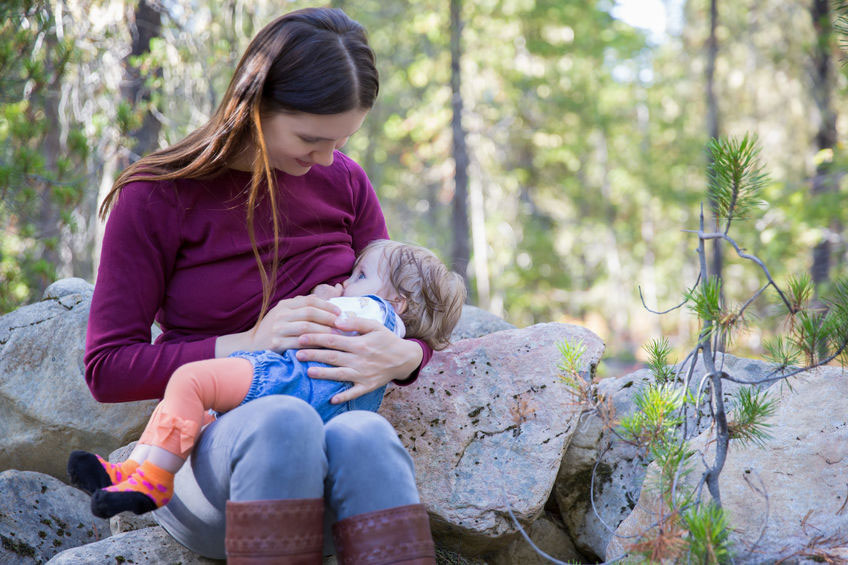 When will my periods return?

Many mothers enjoy a long break from their monthly period while breastfeeding, but periods can return anytime from six months (or earlier) to the second year after childbirth. Exactly when will depend on the intensity of breastfeeding, frequency of feeds and a mother’s body chemistry. One study found that when mothers practiced “ecological breastfeeding” namely; exclusive breastfeeding for the first five to eight months, and with breastfeeding continuing on demand and for comfort day and night, their periods returned at 14.6 months after birth on average7.

Ovulation can happen before the first period and the longer a mother’s periods have been delayed the more likely she will ovulate before that first period 8. If you are aware of what to look for, your body will show signs of impending ovulation such as sensitive breasts or nipples and changes in cervical fluid and waking temperature, see Taking Charge of Your Fertility for further information.

If a baby begins breastfeeding intensely again, for example due to an illness, a mother whose periods had returned may find they stop again temporarily (Mohrbacher, 2010).

How does breastfeeding affect fertility?

Breastfeeding influences the hormones involved in fertility. Even after a mother begins menstruating again, full fertility may not return straight away. Author Nancy Mohrbacher explains:

the hormones of breastfeeding cause a deficient egg and follicle and a deficient luteal phase, and the hormonal levels in the second half of the menstrual cycle are too low to maintain a pregnancy.

Lower levels of luteinising hormone (LH) can prevent normal follicular development which affects ovulation 9 while higher levels of prolactin can shorten the time from the day after ovulation until a period starts (known as the luteal phase of the cycle). If the luteal phase is too short, it may prevent pregnancy from developing 10 however some breastfeeding women ovulate normally in spite of higher prolactin (Wambach and Riordan, 2015). There can be other causes of a short luteal phase and it may be helpful to discuss with your doctor whether progesterone supplements might be appropriate in your situation (Womanly Art, 2010, p 322).

Will the return of my periods affect my milk supply?

Most mothers won’t notice any changes in their milk supply once their periods return. However some mothers notice their nipples are more sensitive around ovulation or feel their supply drops a little at the time of their period—making their baby fuss. The Womanly Art says:

these changes are short lived each month, and solids are there to make up the difference. A daily dose of 500 to 1,000 mg of calcium and magnesium supplement from the middle of your cycle through the first three days of your period can help minimise any drop in supply.

How to increase fertility while breastfeeding

When a nursling isn’t ready to stop breastfeeding yet but his mother is ready to plan for her next baby, a mother may feel she has a difficult choice to make. Fertility will automatically return once breastfeeding falls to a low enough level, but exactly how low is unique to a mother’s own body chemistry. If waiting for this natural return is not an option, ideas to kick start fertility include; increasing the time interval between breastfeeds, giving a baby who is ready for solids his food before a breastfeed and introducing solid food quite quickly. A six hour gap between breastfeeds on one or several nights may be enough to trigger the return of a mother’s periods (Mohrbacher, 2010).

My periods are back but I’m still not pregnant

Once breastfeeding has dropped to a level that triggers the return of your periods, charting your cycles will help gather as much information as possible about your fertility and ovulation. For a comprehensive list of next steps including tests and treatments see Taking Charge of Your Fertility.

There are various reasons why a mother may not get pregnant and this is not necessarily to do with breastfeeding. However, some mothers might not be able to get pregnant with any amount of breastfeeding, even though they are having regular periods. Once they do completely wean, their fertility returns in about a month (Mohrbacher, 2010). For more information on weaning see How to Stop Breastfeeding.

Before being accepted for IVF (in vitro fertilisation) or ICSI (intracytoplasmic sperm injection) you may be asked to stop breastfeeding. For many mothers and toddlers this is not an easy step to take. Researching your options and finding others who have been through this will be helpful. Medications can be checked for safety during lactation (see Medications and Breastfeeding) and the following articles and websites may be helpful:

Breastfeeding during pregnancy: position paper of the Italian Society of Perinatal Medicine and the Task Force on Breastfeeding, Ministry of Health, Italy, Cetin et al, 2014

Based on the hypothetical risk, caution may be warranted for women at risk of premature delivery, although no evidence exists that breastfeeding could trigger labor inducing uterine contractions. In conclusion, currently available data do not support routine discouragement of breastfeeding during pregnancy.

Additional resources with further discussion include:

Despite information to hand, some women (or doctors) may feel their bodies can’t manage to breastfeed and sustain a pregnancy at the same time. The decision whether or not to wean is a very personal one.

Other factors that could affect a breastfeeding mother during pregnancy include nipple soreness and discomfort and 70% of mothers notice a decrease in milk supply causing many children to wean naturally during this time. There is also a reported change in taste of the milk (Wambach & Riordan, 2015).

For mother to mother support for trying to conceive while breastfeeding or breastfeeding through pregnancy try contacting a local La Leche League group. 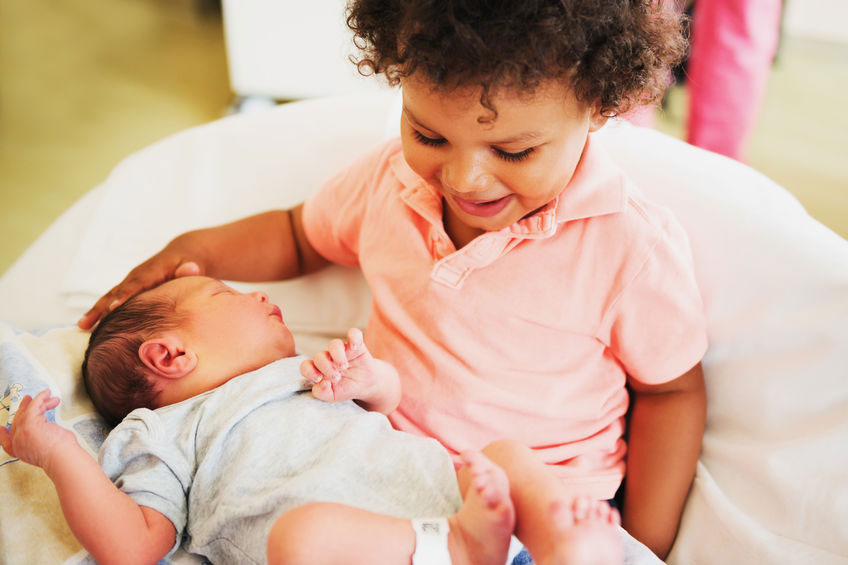 Breastfeeding is quite a reliable contraceptive during the first six months of exclusive breastfeeding as long as a mother’s periods haven’t returned and baby breastfeeds regularly day and night. Although some mothers can become fertile quite quickly after this time, others find that the hormones involved with breastfeeding affect their fertility for much longer. Increasing the time interval between breastfeeds can speed the return of a mother’s fertility.