To make breast milk, a breast needs glandular or milk-making tissue and a neurohormonal reflex to release the milk (see box). Any kind of surgery on the breast has the potential to disturb milk production or milk release to some degree. How breastfeeding might be affected after breast reduction surgery will depend on:

How breastfeeding works. A baby sucking stimulates a nerve by the nipple to send a message to the brain to release specific hormones (oxytocin and prolactin). Oxytocin signals breast milk to be released (let-down) from the milk-making tissue in the breast so that the milk is carried to the nipple through little tubes (ducts). Prolactin signals milk production. Any damage to the nerves, ducts or glandular tissue can affect how breastfeeding works after breast reduction surgery. 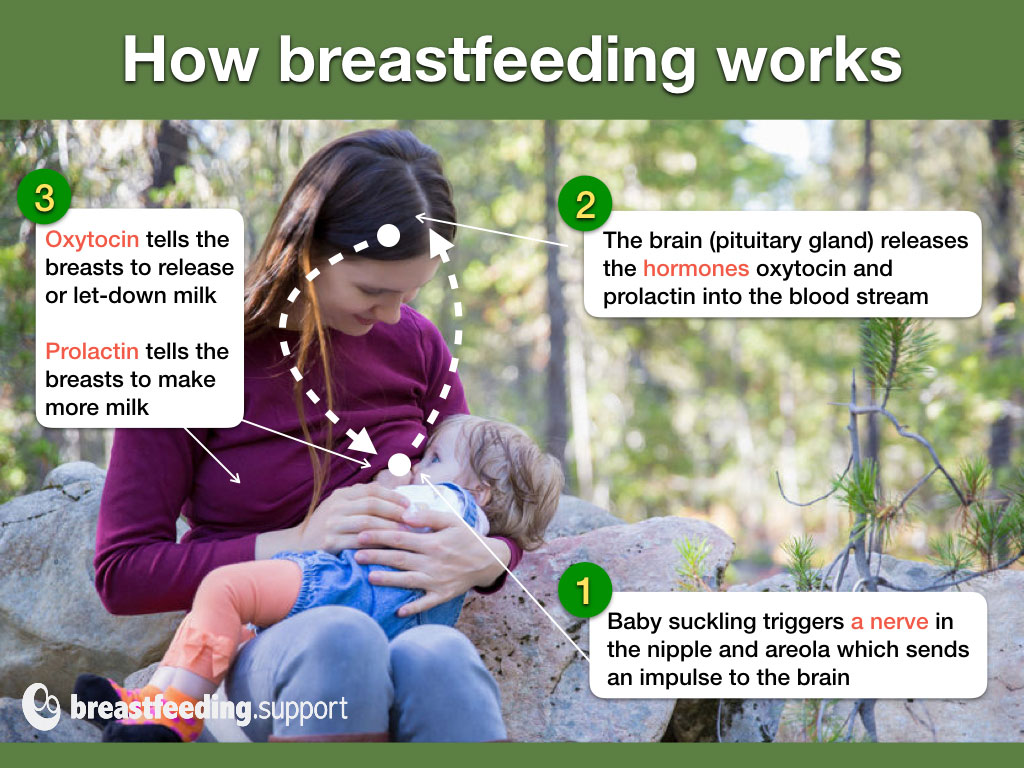 During breast reduction surgery part of the breast will be physically removed and this could affect milk supply in a number of ways:

Several surgical techniques are possible for breast reduction and some will have more impact on breastfeeding than others. The best chance for breastfeeding success will be where the procedure leaves the nipple and areola attached to the breast tissue beneath them. Lactation consultant Diana West has outlined a selection of techniques in her book Defining Your Own Success Breastfeeding After Breast Reduction Surgery and these are summarised below:

#2 How much glandular tissue remains?

#3 How much time has passed?

As time passes after breast reduction surgery, damaged nerves may reconnect (reinnervation) and severed ducts may make new connections to the nipple (recanalisation). Nipples that had lost any sensitivity may become more sensitive again and the capacity of the breast to make milk may improve.

Some milk ducts that have been cut or damaged seem to reconnect or develop new pathways to carry the milk to the nipple. The hormones of pregnancy and to an extent the menstruation cycle can also help with development of new glandular tissue. Breastfeeding also helps this process—with each new breastfeeding experience there can be a little more recovery and a better milk supply. Recovery will be limited by how much breast tissue remains and how many milk ducts.

Preparing to Breastfeed after Breast and Nipple Surgeries, bfar.org, 2016

Researchers found an average of nine ducts that came all the way through the nipple, but as few as four were also observed. A woman with nine ducts can afford to lose a couple, but a woman with only four really can’t afford to lose any. Though she may still have enough milk-making ability, if the milk can’t get out then baby can’t get it and that area of the breast will stop producing.

An important nerve for triggering the release of prolactin and oxytocin is the fourth intercostal nerve. If this is damaged it affects let-down and milk production. According to bfar.org, a website dedicated to breastfeeding after breast reduction, damaged nerves can repair and reconnect at a growth rate of 1mm per month irrespective of breastfeeding2. A good sign that this is happening will be when any lost sensitivity to touch and temperature returns to the nipple.

Preparing to Breastfeed after Breast and Nipple Surgeries, bfar.org, 2016

It generally takes about five years for nerves to grow back to significant or full functionality.

Will I have enough milk?

Although some women manage to breastfeed successfully, there is a strong possibility that you won’t have a full milk supply, especially for the first baby born after breast reduction surgery. It will be important to keep a close eye on your baby’s weight gain and nappy output to gauge their milk intake. It may be necessary to supplement your baby. An IBCLC lactation consultant can help you optimise your milk supply and see A Good Start to Breastfeeding and Is My Baby Getting Enough Milk?

What if supplements are needed?

It’s important that your baby is well fed to give them enough energy to breastfeed and prevent jaundice or dehydration, so supplements of donor milk or formula may be needed. Although you may not be able to make a full supply of milk, any amount of breast milk you can provide will be beneficial to your baby. Breastfeeding is a relationship, not just a way to feed a baby, so comforting your baby at the breast and holding your baby in skin-to-skin contact will be valuable even if you don’t have much milk.

If you need to supplement, options include:

How can I maximise my milk supply?

Spending time in skin-to-skin contact and breastfeeding in the first hour after birth has many advantages for mother and baby including helping a milk supply. If baby isn’t ready to latch on, hand expressing can remove milk instead of baby. This video by Jane Morton explains why the first hour is important for milk supply: A Mother’s Touch Breastfeeding in the First Hour.

Frequent breastfeeding or hand expressing (at least every two hours, more if you can) will help stimulate your milk supply. It may be useful to pump after breastfeeds for a few weeks once your milk is in to maximise your supply.

There are lots of ways to increase a milk supply including frequent pumping with a hospital grade pump, using both breasts per feed, breast compressions, and frequent feeds. It can be very useful to see an IBCLC lactation consultant to help you as there can be other Reasons for Low Milk Supply, not just the surgery. See How to Make More Breast Milk and How to Increase Milk Supply by Pumping.

A galactagogue is a food, herb or drug that might help to increase milk supply or help promote more glandular breast tissue. For much more information see What Is a Galactagogue?

Certain difficulties may present themselves if you have had breast surgery. But bear in mind these problems can come along at any time and may not be to do with the surgery at all—check with an IBCLC lactation consultant or breastfeeding specialist.

Severe engorgement when milk comes in

Some breast engorgement (feelings of fullness and swelling) after birth is normal. Engorgement is not just from milk but includes tissue fluid and blood in the breasts. Engorgement is a good sign that functional milk-making tissue is still present. However some milk ducts may be blocked due to the surgery or scarring. One breast may be more engorged than the other. Areas of the breast that are not able to drain will shut down milk production. Engorgement may be worse with second and subsequent babies particularly after a long and successful breastfeeding experience previously. Try to remove as much breast milk as possible to relieve the engorgement and see Engorged Breasts, and Engorgement Relief When Milk Won’t Flow.

No engorgement when milk comes in?

There can be several reasons for milk not coming in after delivery in addition to removal of glandular tissue by breast surgery. See No Breast Milk After Delivery and contact an IBCLC lactation consultant for help and support.

If you do not have any sensitivity in your nipples it can be harder to initiate the let down, but there are ways to condition this response to other triggers, see Let-Down Reflex: Too Slow? by Kelly Bonyata.

Mothers who have had nipple or breast surgery are more at risk of nipple vasospasm (sudden narrowing or constriction of blood vessels in the nipple accompanied by pain). This is perhaps due to trauma to the blood supply and nerves (bfar.org, 2017). As nipple vasospasm can have other causes such as poor attachment, positioning, certain drugs—including caffeine and nicotine—or Raynaud’s Phenomenon, it is important to rule out all causes. See Nipple Vasospasm and Breastfeeding for more information on treatments and prevention and check wth your breastfeeding helper.

Pain in the breasts

Adhesions in the breast (scars) may be a cause of pain and may inhibit the let-down. There are other causes of pain to rule out however. Thrush or bacterial infections, mammary constriction syndrome and poor latch can all create deep breast pain.

Is it possible that the pain I’m feeling during nursing is from adhesions or scar tissue from the surgery? bfar.org, 2007

When an adhesion is suspected, the first remedy is to try to move the layers of tissue by frequent, gentle massage, which will break the adhesions if they are not too dense. In the case of nipple adhesions, the nipples can be gently pulled outward. With time and active use of the breast, the adhesions will usually diminish in severity.

Breast reduction surgery can cause difficulties breastfeeding and many women will not be able to make a full supply of breast milk. If you have not already had breast surgery you will want to consider this fact alongside the other medical risks3. Breastfeeding may not seem important to you now, but this might change when you approach motherhood. Although there are ways to minimise the impact on breastfeeding when performing surgery this is not a guarantee to success and not all breast surgeons consider protecting breastfeeding without prompting.

What should the surgeon say to the woman asking for breast reduction surgery? That the chances that she will be able to breastfeed her babies exclusively are low. And if this woman is 16 or 17 years old, maybe it’s better to wait a few years, because the surgery cannot be undone, and perhaps in a couple of years she may have a different outlook on life.

Lawrence and Lawrence, Breastfeeding: A Guide for the Medical Profession, 8e, 2016

The surgeon should clearly discuss the options with the patient or provide a procedure that leaves the ducts intact. If the ducts are intact, breastfeeding can be successful postoperatively. The nerve must also be intact for tactile sensations to trigger let-down.

Breast reduction surgery can present several challenges for breastfeeding. However a mother may be able to make a full or partial milk supply depending on the type of surgery, amount of functional breast tissue removed and the time that has passed since surgery. It is important to make sure breastfeeding gets off to a good start to maximise a milk supply after a surgical procedure. An IBCLC lactation consultant or breastfeeding specialist is an ideal support person to help with this so that any breastfeeding problems unrelated to your surgery can be ruled out and your breastfeeding potential can be maximised.