What colour is a breastfed baby’s poop? How much poop should there be? Knowing the colour, consistency and amount of poop your breastfed baby produces in the early weeks can be very reassuring as it provides a guide to whether your baby is getting enough milk. Baby poop can also provide other clues about how breastfeeding is going and your baby’s health. This article looks at what to expect in your exclusively breastfed baby’s nappy during the first week of your baby’s life, weeks one to six, and after the sixth week. 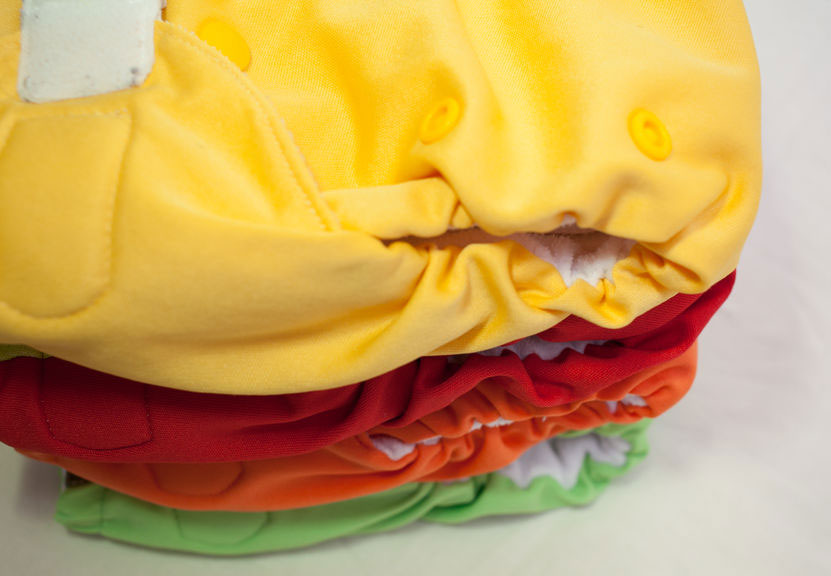 The very first poop your baby passes on the first day of life is called meconium and will be black, thick and sticky. Over the next few days, breastfed baby poop tends to change through a sequence of colours as your baby drinks more and more breast milk. When breastfeeding is going well, the colour of poop generally changes from black on the first day, to dark greeny-black on the second and then to khaki green, brown and finally becomes yellow poop or a mustard colour by the fourth or fifth day. The consistency also becomes softer or more liquid and the number of poos per day gradually increases from one poop on day one, to three to four on day three, and around four large (or ten small) poops by day four or five 1.

Colour of poop in the first five days

The colour changes towards yellow poop, along with an increasing number of wet and dirty nappies, are a great way to tell if your breastfed baby is drinking plenty of colostrum (the first secretion from the breasts after giving birth) and breast milk. If you are not seeing these colour changes on these days, ask for support with breastfeeding to make sure your baby is getting enough breast milk.

During the first five days some babies lose a little weight, newborns can lose up to 7% of their birth weight in the early days of life and this is considered “normal”. When this happens, the daily colour changes in the nappy and the amount of poop can serve as reassurance that breast milk is being swallowed despite a little initial weight loss. However, if your baby continues to lose weight or is not gaining weight coupled with few or no poops, the most likely cause is that your baby is not getting enough breast milk.

If your baby is not pooping the most likely reason will be that he is not getting enough breast milk and this needs urgent attention. The idea that a breastfed baby has no waste and therefore doesn’t poo very often in the first few days or weeks of life is wrong.

If your baby isn’t having any dirty nappies (or not many per day), and if the colour hasn’t substantially changed by day four or five, check with your healthcare provider and call an IBCLC lactation consultant or breastfeeding specialist to check your baby’s latch, position, how often you are feeding and whether you are using one breast or two per feed. Watch your baby feeding carefully. If he doesn’t seem to be swallowing milk at the breast, expressing your milk will protect your supply and provide a supplement to feed your baby with until you can get help with breastfeeding.

What about wet nappies?

When breastfeeding is going well you might expect to see at least one wet nappy on the first day of life followed by at least two on the second, at least three on the third, and so on to at least five wet nappies by the fifth day of life. Plenty of wet nappies are important to show that a baby is well hydrated. Wet nappies, however, are not a substitute for dirty nappies which can serve as a good guide that a baby is getting enough milk in the first few week of life.

How wet is a wet nappy?

It can be difficult to check for little wees in a disposable nappy as they are so absorbent. West and Marasco suggest checking the weight of the nappy as a guide. A baby’s wet nappy will feel equivalent to a clean nappy plus two to three tablespoons of water (30-45ml)2. After the first week, you might expect around five or six wet nappies per day that are heavy with clear urine.

Reddish marks in a dry nappy?

In the first couple of days after birth, before a mother’s milk has come in, parents may spot orange or reddish “brick dust” marks in a baby’s nappy. These are known as “urates” or urate crystals and may be mistaken for blood. Check with your midwife and breastfeeding specialist as they may be a sign your baby is not getting enough milk. A little blood in the nappy of a baby girl may also be “pseudomenstruation” due to hormonal changes. Jack Newman has a Facebook post with a photo and more information about urates.

Breastfed baby poop—weeks one to six

The usual colour of a breastfed baby’s poo by the end of the first week is yellow, mustard or light brown, however there can be a wide range of normal when it comes to colour and consistency. Breast milk contains traces of the mother’s diet. And so mother’s diet or any medications she (or her baby) are taking may affect the colour and form of her baby’s poop.

Green poop is also common, it could be normal for your baby or have one of a number of other explanations. A baby with green poo may have an intolerance to something in his mother’s diet, be suffering from a lactose overload (green, frothy and foamy poop), not be getting enough milk or there may be another reason. See Why is My Breastfed Baby’s Poo Green?, Lactose Intolerance in Babies and Milk Allergy in Babies for more information.

At least three poops per day

Expect frequent copious dirty (yellow or mustard) nappies every day and five or six wet nappies per day in the first six weeks or so. As above, if your baby is not pooping or weight gain is poor, see Is My Baby Getting Enough Milk? and contact your IBCLC lactation consultant for help with breastfeeding.

The Womanly Art of Breastfeeding*, 2010 LLLI

Diapers. Look for at least three “okay” (thumb and forefinger circle size) diapers each day during the first month or so.

A breastfed baby’s pattern of dirty nappies can change around six weeks of age and they may start having fewer dirty nappies or not pooping every day. This isn’t a concern at this age as long as weight gain continues to be good with plenty of wet nappies as before. Lactation consultant Robyn Noble says a breastfed baby over six weeks of age will typically have one copious mustard yellow poop per day with a consistency of toothpaste. 3

Some breastfed babies may only stool once every three to ten days or so and their poop may be light brown due to a longer time in the gut. 4 Because the poop is soft and there’s plenty of it when it comes, this is not constipation. However, although parents may be told that this can be normal, it may not be ideal. A baby may be feeling uncomfortable after this period of time. One author proposes that a potential cause of infrequent stooling, despite a good breast milk intake and weight gain, is a sensitivity to cows’ milk products coming from the mother’s diet—especially if accompanied with rashes and other symptoms of allergy5.

Some babies who seem to be uncomfortable may be helped to poop by holding them in a more upright seated position e.g. over a toilet or potty. Baby can be held securely with their back supported against a parent’s chest and with a thigh held in each hand in a supported squatting position. Gravity and freedom from a nappy can help a baby open his bowels 6.

Breast milk is said to have a laxative effect7 and constipation is more likely with formula-fed or mixed-fed babies (Palmer, 2015, p179). True constipation involves hard dry, infrequent stools and a baby’s doctor will help to find the cause. Constipation can be associated with a food allergy8 or medical reasons such as a neurological disorder or even certain medication—reflux medication or iron supplements can cause constipation (Palmer, 2015).

Situations that could be associated with food allergy described by author Robyn Noble in her book Breastfeeding Works! Even With Allergies include:

The colour of poop

As with weeks one to six, the usual colour of breastfed baby poop before a baby starts solid food is yellow or mustard. Green coloured poop could be normal for an individual baby but there are also several other possible reasons, see Why is My Breastfed Baby’s Poop Green? Any concerns about the colour of your baby’s poop should be reported to your baby’s doctor and especially in the following situations:

Very dark or black poop (other than the first few days of black meconium) could be a result of digested blood due to bleeding somewhere in the gastrointestinal system and should be reported to your health professional urgently. If a baby drinks a lot of blood stained breast milk due to his mother’s cracked nipples this may also cause very dark coloured poop, check with your health professional and see Blood in Breast Milk.

If there is any bleeding lower down in your baby’s gut it may show as red streaks in your baby’s nappy as it won’t have had time to be digested. Traces of blood may be seen if a baby has allergic proctocolitis but there are other possible medical causes of bleeding. Report all cases of blood in the nappy to your doctor.

Very pale or chalky white stools or stools that appear “fatty” or “greasy” should always be reported to your health professional. See What are the Symptoms of Jaundice? for further information.

Small lumps or strings of clear mucous may be seen in your baby’s nappy from time to time, mucous is produced in the bowel to lubricate the stool and is normal. But if there are frequent large amounts this may be due to some irritation in the intestines such as food allergy or sensitivity, an infection or it could be associated with other health issues—discuss with your doctor to rule out any concerns.

Unusual colours of an exclusively breastfed baby’s poop can be due to artificial food colouring, natural food pigments or medications in his mother’s diet.

For a more in depth review of all the possible colours of baby poop and what they mean see Baby Poop: What Your Pediatrician May Not Tell You. For a review of the content of this book click here.

The contents of your baby’s nappy can provide useful information about breast milk intake and your baby’s health alongside other signs that your baby is receiving plenty of milk. See Is My Baby Getting Enough Milk? and Baby Not Gaining Weight if you have any worries about how much breast milk your baby is having and seek the help of an IBCLC lactation consultant or breastfeeding specialist. Always report unusual colours of poop or any other concerns to your health professionals.

*Excerpts reprinted by permission of Pinter and Martin